Vaping Drugs: What Drugs Can Be Vaped?

With thousands of flavors to choose from, vaping device trends continue to grow amongst young people. In 2020, the CDC reported 19.6% of high school students and 4.7% of middle school students use e-cigarettes.

To prevent further success of any false advertisement and misinformation directed at teens, parents must have answers for their kids. As parents, it is crucial to inform your kids about vaping drugs with the correct information. This can help to prevent your child from becoming addicted, as well as the overall growing trend of vape pens.

This resource goes over different vaping products and devices, along with what drugs can actually be vaped. Vaping drugs can be very dangerous, whether it’s an electronic cigarette or a vaping marijuana device. Our San Diego drug rehab offers treatment programs for those who may be struggling with a drug addiction.

What Devices Are Used For Vaping Drugs?

Vaping drugs are generally done with devices known as e-cigarette, e-vaporizers, or electronic nicotine delivery systems. These devices are battery-operated in which the user inhales an aerosol that may contain nicotine, flavorings, and other chemicals. Some vaping devices may resemble a traditional tobacco cigarette, while others look like a big refillable tank. Regardless of the differences in appearance, they operate and are made of similar components.

In today’s market, there are more than 460 e-cigarette brands to choose from. The most common nicknames for vape pen devices include: 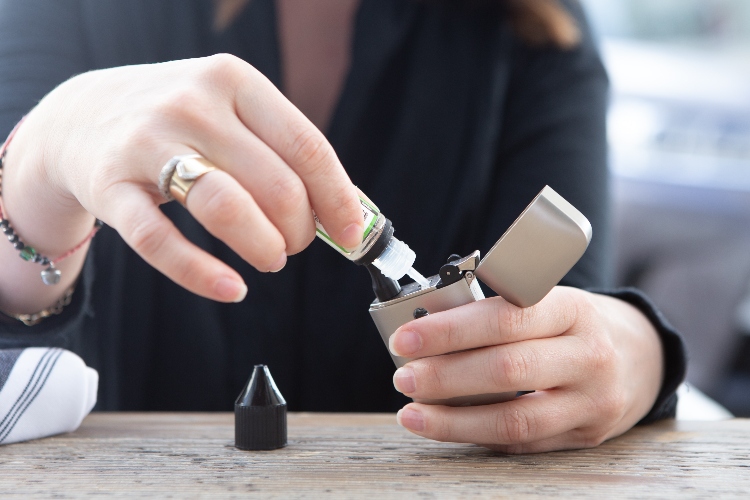 Vape Devices and Other Illegal Drugs

The National Institute on Drug Abuse found that the number one reason teens vape is to experiment. (Which accounts for about 60.9% of teens.) Additionally, according to a poll by Kings College poll in London, 39% admitted to vaping drugs other than nicotine. Due to its popularity, it comes as no surprise that people in middle and high school, and young adults are testing their vaping device with drugs other than nicotine.

Vaping nicotine is now one of the most addictive habits that is associated with possible health risks. False advertising has influenced younger generations into thinking it is a better alternative or improvement in lifestyle. However, the reality is that vaping can cause harmful lung injury and other health effects to the body. In fact, the nicotine content in vape liquids is almost 4 times higher than regular smoking cigarettes.

Illicit drugs can be added to water and then vaporized in a vaping device. Some drugs that have been reported to be vaped include LSD, GHB, and ketamine. Other drugs like crack, heroin, or meth, are hard to vaporize because most vaping devices don’t heat up to a hot enough temperature. Documented attempts suggest that the filters in the vaping devices clog, and therefore ruin the drugs.

Can You Vape Crack Cocaine?

As mentioned before, vaping certain drugs isn’t possible because the vape pen cannot get hot enough and then becomes clogged. All vape pens contain the same components that are made of a cartridge, e-liquid, mouthpiece, battery, and a heating component. None of these parts were designed for vaping drugs other than liquid nicotine, CBD (an ingredient in marijuana), or marijuana.

Like any other drug that is not made for vape pens, crack cocaine cannot be vaped with these devices.

In general, vaping devices are harmful to the body, especially when vaping a substance that it was not designed for. The effects of cigarette vape pens can be as severe as irreversible lung and brain damage.

If you or someone you love has tried to vape illicit substances or is addicted to drugs, help is available. At Healthy Life Recovery, we offer individualized treatment plans for addiction treatment. Our programs can provide you with the tools you need to succeed in long-term recovery.